When Eric DeBorde started showing cattle as part of his FFA project, he found more than a hobby. He found an all-consuming passion for learning about every part of the animal, from head to hoof.

Well-trimmed hooves, he discovered, were important in the cattle business, which piqued his curiosity about the art and craft of hoof-trimming.

"I thought, 'If I'm going to stay in the cattle business, I want to learn all of the pieces of it,'" says the Bardwell, Texas, cattleman.

Fortunately, DeBorde found a mentor and a friend in his own hoof trimmer, who hired Eric when he was a high school senior, to help trim hooves on show cattle and dairy cattle across North and Central Texas. The gig continued when DeBorde went off to Tarleton State University to study agriculture.

Then, in 1994, an opportunity arose when the mentor moved to New Mexico. DeBorde built a trailer and chute and started his own business.

Despite his experience working alongside the elder hoof trimmer, DeBorde still had to prove himself. Some weren't sure the young man was ready to work on their valuable cattle.

"It was a little rough at first," he explains. "While everybody knew me, they also knew he'd always been with me before."

One day, DeBorde figured out how to erase the doubt.

"I learned to tell them exactly what I was thinking about the calf before I put him in the chute," he says. "If I see something that's off about the way it's walking, I explain what's wrong and how I can fix it."

Once his customers could see just how quickly he could point out their animal's shortcomings — usually within a 20-foot walk — they knew he was the right man for the job.

"That was my turning point," DeBorde says.

Twenty-one years later, there's no doubt DeBorde has made a name for himself. He was even featured on the National Geographic Channel's "Jobs That Bite" program in 2013. But he's not one to grow complacent.

"I always say you've got to have a picture in your head of what an ideal animal looks like, including how it should walk.

Whether you're breeding them or showing them or trimming their feet, you should always have that goal in mind to keep moving forward," DeBorde says. "This business is so fast-changing, if you're not doing that and you are comfortable with where you are, you're going to be out of the groove real quick."

In addition to the ever-changing ideal, he says the bar for quality is set higher now than when he started his business. Cattle cost more too, which makes his job even more important, whether he's working with show steers that eventually will go to market or show heifers that end up in a pasture.

With steers, he says, there's no time for a setback. Foot problems can mean decreased gains or show-day lameness — and there's often no second chance. When a show heifer gets a bad trim or has a recurring problem, she may not be able to perform later in life.

DeBorde compares cattle with a history of bad hoof trimming to injury-plagued athletes.

"You can ask anyone who played football," he says. "If they really got beat up or they just exercised too hard or they tore something years ago, they still have a hard time getting up to get started. Cattle are the same way. If that foot's off and we keep adding to that problem as they grow, then it's going to lead to arthritis-type symptoms."

He says he often sees cows that last only four or five years past the show ring because they had too many problems as calves.

"They can't function as a cow," he says. "As long as they're up by the barn being handfed they're fine, but they can't make it in the real world."

And as a cattleman himself, he understands how important that is. He wants show steers that can survive the feedlot and show heifers that will be productive cows. And, of course, he wants to win.

"By being as smart as we can on how their feet are growing, we can make one gain better, look better and be more competitive," he says. "It can be the difference between first and third place."

"I don't need to watch them walk for an hour," Eric DeBorde says, "but if I can watch them walk straight ahead where their body's not turning, I can tell you most of the problems with the animal pretty quickly — and then I can adjust them on the table." 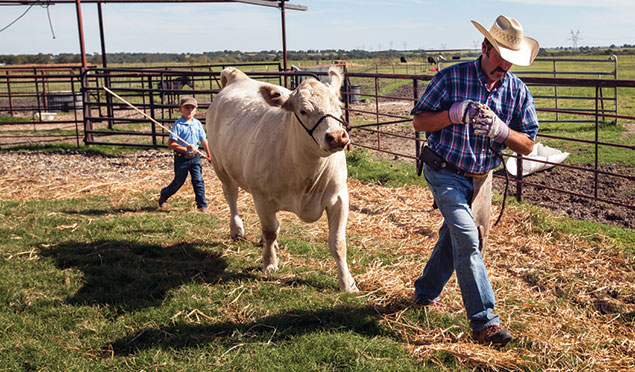 After a quick analysis of the animal's gait, he loads it in the chute and flips the trimming table over so that the animal is on its side. 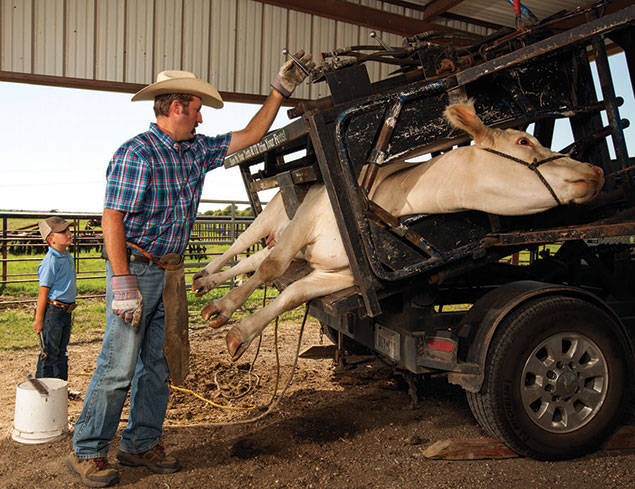 STEP 3. Get up close and personal.

During a thorough exam and cleaning, he looks for imperfections and problems such as an abscess, foot rot or even a foreign object. He also checks the hairline for clues, such as a muddy environment. 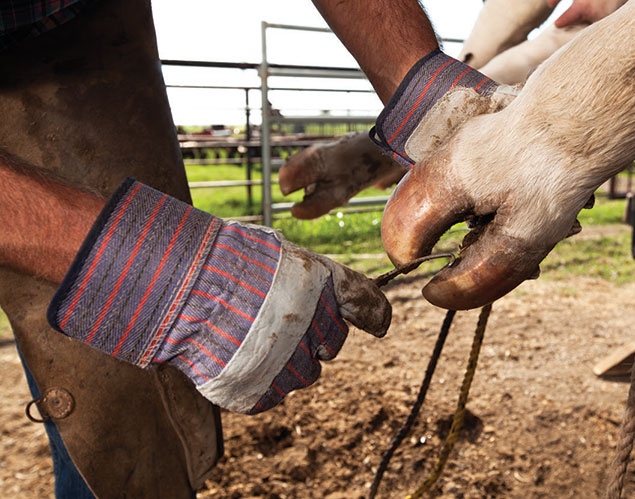 DeBorde grabs his nippers and props the first hoof up on his leg. He trims the outside of the foot, crafting the hoof into the shape he desires. In serious cases he may go back and do some extra trimming toward the toe or heel. 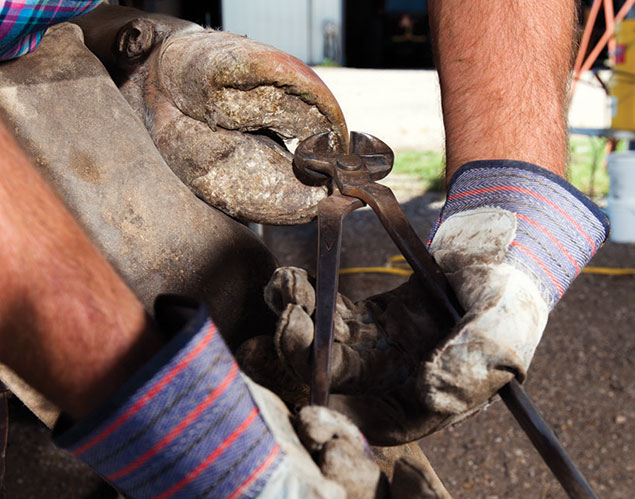 DeBorde uses an old-fashioned rasp to do the final shaping and smoothing, rather than using the more common electric tools, because it allows him to make more corrections without the risk of burns.

A Passion for Kids and Cattle 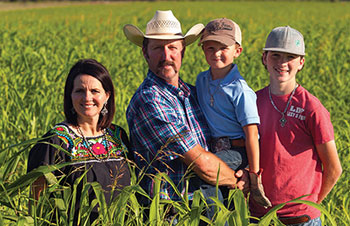 That's the first advice Meredith DeBorde offered her agricultural science students at Ennis High School during her first week on the job this past August. It's a principle that has served her and her husband, Eric, well. After all, teaching was not her first career option. Similarly, Eric made sure he had another skill to fall back on, even though he wanted to be in the show cattle business. That's why in addition to holding an agricultural degree, he's also a licensed electrician.

The couple, who met at Tarleton State University, has two sons, Brayden, 12, and Brigham, 5.

They raise club calves and own a feed supplement company, Top Line Nutrition, which has dealers across the state and mail-order customers nationwide.

When buying land to start their Lazy D Farm and later expand their cattle operation, the DeBordes turned to AgTexas Farm Credit, based on a recommendation from one of Meredith's former co-workers. The couple says they couldn't be happier with the lending co-op.

"We love the relationships we have built with the staff at AgTexas and our shared commitment to youth and agriculture," Eric says. "They make you feel like family."

A part of that family is Matt Thomas, AgTexas vice president of lending in the Hillsboro branch. Thomas first had a chance to interact with their son Brayden when he purchased the boy's steer on behalf of AgTexas at the county livestock show. He was extremely impressed.

"Some of these kids don't know how to talk to adults — they get shy or nervous. But that young man was very polite. He looked me straight in the eye and gave me a firm handshake and just really stood out from the rest," Thomas says.

Although the Debordes' endeavors have evolved over the years, they've both followed their passions — agriculture and kids. Whether helping their own boys, serving as advisers for cattle exhibitors or holding show clinics, the couple is always there to teach lessons that go way beyond the show ring.

That's because life is full of lessons, especially if you don't limit yourself.