The Root of a Sweet Potato Farmer’s Success

What started as a high school project for Darrin Vance is now a full-time farming operation.

Even as a kid, Darrin Vance knew he didn’t want to sit around inside. Before he was old enough to go to school, he would wait along the road near his house until a family friend showed up on a tractor so he could hitch a ride out to the fields.

Outside Houston, in the heart of Mississippi’s sweet potato-growing region, farming was a full-time job for some and a part-time job for many in the 1980s and ’90s. But it wasn’t until Vance was a junior in high school that he tried growing the crop himself. That was the year a friend suggested teaming up to grow sweet potatoes for a marketing class. The project changed his life.

Vance and his friend, Brad Funderburk, rented five acres for their project, but rather than stop after it was over, they continued raising sweet potatoes throughout high school. The crop takes year-round work, with a lot of labor, time and input costs compared with the corn and soybeans that are also grown in the area. But it’s also more profitable.

Boil or bake the sweet potatoes in the skin. When cool enough to handle, peel and mash the potatoes and add remaining ingredients. Pour mixture into the pie shells and bake at 350 degrees until the centers are set and crusts are browned, about 30 to 35 minutes.

Boil or bake the sweet potatoes. When cool enough to handle, peel and mash. Combine with other casserole ingredients and pour into a 2-quart casserole dish.

Combine ingredients for the topping and pour over the sweet potato mixture.

A few years at Mississippi State University taught Vance more than a lesson in real estate finance. It taught him that farming was what he really wanted to do, so he came back to Houston and picked up where he’d left off with Brad.

The friends used family equipment or borrowed old tractors, plows, setters and diggers, eventually buying their own and working their way up to 210 acres that they leased and farmed together. The property’s owners, Hershel and Wanda Duffel, allowed them to apply the rent toward the purchase of the land.

“I had a lot of help from other farmers, in more ways than one, or I would never have made it,” Vance says.

Land of His Own

When it came time to buy the property, the Duffels suggested that the pair look to Mississippi Land Bank. The lender has experience financing cropland and country homes and can tailor financing for young, beginning and small farmers.

The friends had been working together for several years by then and were ready to expand and farm on their own, so in 2005 they split the land and each bought 105 acres.

One partnership came to a close, but another had already begun. In 2000, Vance married Sharon, who had lived around the corner when they were kids and had been best friends with his sister. A teacher at Houston Upper Elementary School, Sharon worked by his side in the field, even when she was expecting their first child, Garett, now 8. At the end of the day, they headed home to a trailer on a few acres near where they grew up. It wasn’t the home of their dreams, but it was necessary while he cultivated his business.

Before they could build a house, Sharon says, they had to build a potato shed, a climate-controlled warehouse that can store 26,000 bushels of sweet potatoes. Then came a second shed and a second tract of farmland — another 100 acres that includes some timberland — and another round of financing through Mississippi Land Bank.

In 2008, the couple turned to the lender once more to finance a new home on their property. After nine years living in a 1,100-square-foot trailer, in March 2009 they moved into a house with more than three times as much space, an office, a game room, stone countertops and a view of their sheds and growing supply of farm equipment. At 32, Darrin Vance was an established farmer who provided the input costs for his crops out of his own pocket.

But 2009 was a difficult year for sweet potato farmers in Mississippi, which is second only to North Carolina for sweet potato acreage. Within six months of the Vances moving in to their new home, heavy rains inundated the fields during the fall and kept farmers from harvesting most of their crop, which rotted in the fields. Then a few months later, the Vances found out they were expecting their second child.

For the first time, Vance had to get a crop loan to start planting in the spring of 2010. But the timing was right to approach Mississippi Land Bank, which offered its first short-term loans that year. Then when better weather allowed him to bring in a good crop that fall, he paid off his crop loan and returned to financing his own operation.

Vance is having another good year. Between land that he owns and rents, he farms about 500 acres, raising corn, soybeans and labor-intensive Beauregard sweet potatoes, which grow not from true seed but from other potatoes.

He stores thousands of bushels of seed potatoes after the harvest to plant the following spring. Every year he also buys some virus-tested sweet potatoes known as foundation seed that he introduces to prevent decline. The potatoes are planted and allowed to sprout, and the young plants are cut off and used as slips that are planted in the sandy loam that typifies the land around Houston. Their tuberous roots develop into the sweet potatoes that are harvested from late August to late October.

The harvest requires about 40 people and several tractors, loaders and 18-wheelers that run from dawn to dusk to dig, sort and deliver up to 3,000 bushels a day to storage facilities. A crew of friends, uncles, cousins and seasonal workers return year after year to bring in the crop.

Sorted by size into 20-bushel wooden bins, the sweet potatoes cure for several weeks to develop a sweeter flavor, and then are stored in the cooler sheds for up to several months. Once or twice a week, even in winter, Vance washes several bins of potatoes and sells them to wholesalers.

“It’s a high-value crop, but it’s expensive to grow this crop,” says Benny Graves, executive director of the Mississippi Sweet Potato Council in nearby Vardaman. “There’s a set of fingerprints on every transplant that’s set out in the springtime, and then a set of fingerprints on every sweet potato that’s harvested in the fall. When you’re touching a product that much with human hands, you’ve got a lot of labor expense.”

The most attractive, medium-size potatoes are distributed fresh in grocery stores.

Others that are too small, too large or have unusual shapes are graded for processing and are canned, frozen or used in products such as baby food and pet food.

The rising popularity of one product has been a windfall for farmers. In the past two or three years, sweet potato fries have more than quadrupled the value of the processing-grade sweet potatoes that can make up about a fourth to half of a farmer’s yield, Vance says. He once had to toss part of every year’s harvest in the woods for the deer to eat, but now he can sell all of it.

“It’s amazing. Amazing,” says Graves of the boost the trend has given farmers. Several nearby facilities process sweet potatoes year-round, including a one-year-old ConAgra Foods plant in Delhi, La., that makes nothing but frozen sweet potato products.

It’s hard to imagine Vance could find the time to do more, but he would like to someday build his own washing and packing facility. It would mean coming up with $200,000 or more to construct a building and install the equipment, but he would no longer have to pay to wash his own potatoes — up to 4,000 20-bushel bins a year — and he could lease the facility to other growers when he wasn’t using it.

Maybe by then another generation of Vances will be ready to go into farming.

Good and Good for You

A member of the morning glory family, sweet potatoes have been grown in the Americas for thousands of years. They were first documented on one of Christopher Columbus’ voyages to the New World and soon were being grown in Europe and Asia. Today, these descendants of tropical native plants are grown extensively in the southern United States, especially North Carolina, Mississippi and Louisiana, where they thrive in heat, humidity and loose soil.

Sweet potatoes come in a number of varieties, and their skin can be pale brown to orange to deep red or purple. The flesh can be white, yellow, orange or red, and is described as soft or firm, depending on the variety. The moist soft varieties that are grown in the South are sometimes called yams, but technically that name refers to starchy roots that grow in the tropics and are not botanically related to sweet potatoes.

Harvested in late summer and fall, sweet potatoes are a popular holiday food for Thanksgiving and Christmas, but you will be doing yourself a favor if you eat them all year. That brightly colored flesh is a signal that sweet potatoes are a nutritional powerhouse loaded with vitamin A, vitamin C, potassium, other nutrients and fiber. The Center for Science in the Public Interest puts them at the top of its list of the 10 best foods to eat for good health.

Sweet potatoes are delicious in sweet and savory recipes and can be baked, boiled, steamed, microwaved and stir-fried. You can even eat them raw in a salad or with a dip.

When shopping, look for smooth sweet potatoes that don’t have any cracks, wrinkles or soft spots. Store in a cool, dark, well-ventilated place, but don’t refrigerate them before cooking or you might alter their distinctive texture and flavor. Use them within a week or two.

You can also find sweet potatoes in the canned and frozen food sections. Packaged sweet potato puree can be substituted for mashed fresh sweet potatoes, and either can stand in for canned pumpkin in recipes. 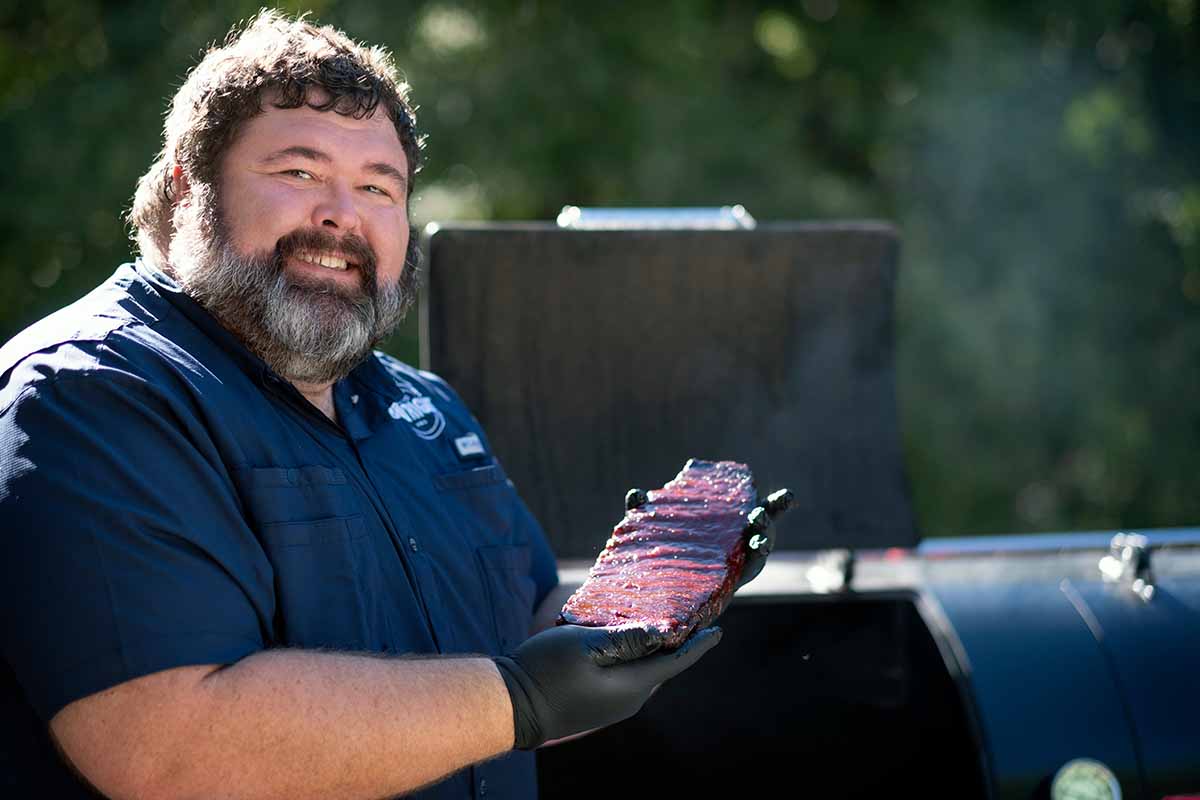