The Lure of Bass Fishing

Braxton and Kent McNaughton share their love of fishing through the popular baits they design and market from their hometown of Greenville, Alabama.

It's a fortunate person who can turn a passion into a business. When that passion involves bass fishing and family, some would say the person is even luckier.

Such is Braxton McNaughton of Greenville, Ala., who with his son has been making and selling lures for more than 30 years.

The longtime fisherman never actually set out to build an international business, however; he simply wanted to make his own baits to save money.

Braxton developed a love for fishing as a youngster in the 1960s, when he and his grandfather would cast for bass from sunny pond banks in south-central Alabama. A decade later, while employed by a local plywood mill, he often spent his spare time fishing on the Alabama River. When he wasn’t doing that, he was pouring molten lead into hand-size molds, making his own spinner baits to minimize his fishing expenses.

Eventually, the young man graduated to making plastic worms, preferring these to spinners.

"I got so busy with worms that I didn’t have time to make spinner baits anymore," Braxton says. "I made more and more worms, because I enjoyed it so much. It wasn’t at all like working at the mill."

And then he started looking for ways to pay for his hobby.

“How many kids have had a good time catching fish with these baits?" he wonders alout. “It makes me feel good [to know] that I've helped put a lot of smiles on people's faces.” - Braxton McNaughton

Keeping Up With Demand

Operating as Mac’s Baits Inc., Braxton began designing molds and production methods that would make enough worms and other soft plastic lures to meet demand. At the outset, working in his wife’s kitchen, he started with 10 small store-bought molds that would each turn out two worms at a time.

Today, with three employees and injection molding equipment that he has bought and modified or designed outright, Braxton’s plant, nestled in the pines north of Greenville, has the capacity to produce up to 35,000 worms and other soft plastic baits in a day.

Growing up, his children, Stewart, Kent, Deedra and April, worked alongside him in the bait business, but Kent was the only child who got hooked on it.

"We’d stay until late at night and talk about our dream of having a successful company, where our products would be sold across the U.S. and maybe even outside the country," Kent says.

For three decades, the family made plastic lures in bulk and wholesaled them to companies that packaged and sold them under their own labels. Then Kent, who is an assistant school principal, started a business marketing his dad’s lures.

Kent buys the lures from Mac’s Baits and packages and sells them under the name NetBait. Working through distributors, he sells the lures to tackle shops and large sporting goods stores all over the United States and in several foreign countries.

According to the father-son team, the baits are in demand because they get results — they catch fish.

"We’ve sold them in China, Japan, South Africa, Canada and other countries," Braxton says. "Fishermen in South Africa have done well with them. And once we sent 900 packages of Paca Craws to Japan by next-day air."

The McNaughtons have spent long hours at fishing shows and tournaments to promote the baits. But their big publicity break came in 2006, when a professional fisherman using their T-MAC lure in the "Bama bug" color won $500,000 in a tournament. Reports about the lure got out, and NetBait’s phones rang off the hook.

"We ran the bait in that color for 30 days straight, 24 hours a day, trying to fill orders," Braxton says with a smile.

Today their biggest sellers are lures in the family of crawfish imitators that started with the Paca Craw, named for an attempt by one of Kent’s young daughters to call Braxton "Papa" Mac. Now there are 23 NetBait lures in various sizes and colors, such as "green pumpkin" and "June bug."

The grandchild-focused decision is typical of Braxton, who mentions his family at every opportunity, rather than dropping names of big-time anglers he’s worked with.

"I’ve had three or four days fishing that I’ll never forget," he says. "One day when Kent was 14, he and I were fishing below a dam. We caught 42 fish, and he caught 30 of them.

"Another time, my oldest son, Stewart, and I were fishing a tournament together," Braxton continues. "I had a fish, and he tried to net it for me. He fell out of the boat. He was in the water, but he still had one foot in the boat." The boy was in no danger, and the men still laugh about the event.

"One of my grandsons, Hunter Gallahair, and his friend, Hunter Caldwell, were with me," Braxton says, beaming. "My grandson caught a 2-pound fish, looked at his friend and said, ‘My Papa Mac taught me how to do that.’ It’s a day I won’t forget." Sharing the joy of fishing is deeply rewarding for Braxton, and he hopes that with his lures he is helping to extend that joy far beyond his own family.

"How many kids have had a good time catching fish with these baits?" he wonders aloud. "It makes me feel good [to know] that I’ve helped put a lot of smiles on people’s faces."

Braxton and Kent McNaughton fish in tournaments and treasure their experiences and the friends they’ve made along the way. But one of their most rewarding activities is making lifetime fishermen out of youngsters.

Kent recalls a weekend this past spring during which he took his son Parker and a nephew, Zach Kendrick, fishing on the river.

"We caught 56 fish, the most I’ve ever caught in a day of fishing," he says. "I stopped fishing and spent most of Saturday coaching the two of them on where to cast and explaining why they were casting there. It’s one of the most memorable trips I’ve had."

When Kent fishes alone or with another adult, he likes to work the shallows, flipping baits into heavy cover for big bass. But when there are youngsters along, he will change his methods.

"If I’m taking children, I want to fish in open water and go for quantity of fish rather than quality," he says. "The fish aren’t normally as big, but the point is to catch fish and keep the children interested. I look for fish on points in open areas, so the kids don’t stay hung up so much. We do whatever their interests are, and when they’re done for the day, we take it back to shore."

Kent tries to make it interesting for every age.

"If there’s a turtle, catfish or any other kind of animal, I point it out," he says. "During spring break, we went into a backwater area so they could see alligators."

"Caden likes to reel in the bream," Kent says. "She also prefers to eat snacks and hang out in the boat."

And in the summertime, another possibility exists. "Anytime they want to jump in the water and swim, we stop and do that, wearing life jackets, of course," he says.

Kent McNaughton offers these suggestions for fishing trips with children:

The McNaughtons don’t spend all of their spare time on the water. They also own and manage timberland near Greenville.

"Alabama Ag Credit has had the privilege of working with the McNaughton family on several timber tract purchases," notes Scott McCall, regional president of Alabama Ag Credit, based in Montgomery. "We value the long-term relationship and look forward to serving the family for many years to come."

"We’ve used them whenever we’ve purchased land," Kent says. "Mama and Daddy always had good experiences with them and suggested that Chanda and I go with them, as well." 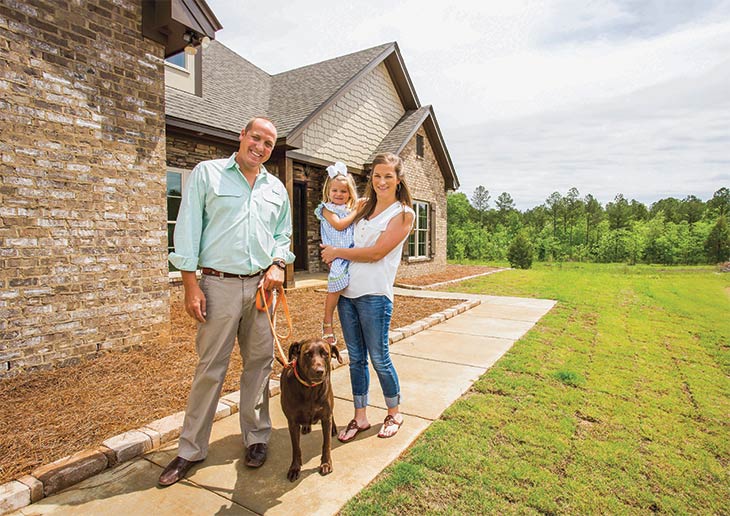