Bruce Berg takes pride and pleasure in taking guests on tours of his ranch, located in the heart of Texas, where he runs Angus mother cows and works to restore native rangelands. When he drives alongside one pasture that's lush and green with tall grass, his passengers usually gasp.

“What the heck is that?” they ask.

Berg is accustomed to the question, and he always welcomes the comments and inquiries. Even before he bought Rocosa Ridge Ranch in Bosque County, the Dallas investment banker had long known the value of sharing knowledge and experience.

“Whenever I talk to students or my kids, I always stress that I've had help in everything I've ever done in my life,” he says. “Because I grew up on a farm and was an ag student, I knew about Extension services and the information they offered. I also knew about research farms and where to find other resources. All I've ever done was what everyone else showed me how to do.

“My rule of thumb has always been ‘Hang out with smart people,’” Berg says.

On the southern end of Rocosa Ridge, golden grasses carpet both sides of a gently curving ranch road. On a far horizon, a swath of dark green distinguishes Berg's land from his neighbor’s. “That's how this place used to look,” Berg says, nodding toward the distant line of bushes. “It was solid juniper, just like what you see over there.”

Undeterred by the infestation of juniper, referred to locally as cedar, Berg bought the land anyway. “Rangeland had always interested me, and I love wildlife,” he says. “There's an art and patience to managing rangeland. You can mess it up very easily, but fixing it is hard. It doesn't matter how many resources you throw at it to improve it. It's up to Mother Nature, time, rest and fire.”

Berg's keen insights stem from his boyhood, which he spent mostly working on his family's farm in Missouri. In college, he earned a bachelor's degree in animal science and a master's degree in physiology, concentrating on cattle reproduction.

After working for nearly five years for an Iowa seed company, he switched gears.

“I could see 30 coming, and my wife, Barbara, and I were expecting our first child,” Berg says. “I was also interested in finance, so I went back to school and earned an MBA in finance.”

In 1988, the family moved to New York City, where he joined a well-known investment firm on Wall Street. Before the year was over, he had transferred with the company to Dallas. “As soon as I could, I bought a place in the country in East Texas,” Berg says.

When a close friend showed him the grasslands of Bosque County, he decided he'd rather ranch there. In 2005, he sold his East Texas property and bought 3,000 acres, which would become the first half of Rocosa Ridge. Four years later, Berg — who retains a line of credit with Texas Land Bank in Waco — purchased the ranch's northern 3,000 acres.

Armed with years of study, ongoing research and advice from experts, Berg rejuvenated the land by applying prescribed burning practices to all but 214 acres. He also mechanically removed the Ashe juniper as part of the Fort Hood Recovery Credit System to protect golden-cheeked warbler habitat. “We worked for 53 weeks, five days a week, using two skid-steer machines with clippers,” he recalls. “Then we seeded native grasses.”

With pasture re-established, Berg installed interior cross-fencing as part of his rotational grazing management plan, so that he could monitor grasses and adjust cattle stocking rates. Most recently, he drilled a well on the south end, installed an electric pump and laid 4.5 miles of water lines. The system feeds eight new water troughs.

“Historically, the ranch had little water, and we wanted to improve grazing distribution,” he explains.

The cement troughs also provide water for white-tailed deer, which he manages under the Texas Managed Lands Deer Program. The program is designed to help landowners stabilize deer herd populations and improve habitat.

“We used to have one deer to every 15 acres,” Berg says. “Then we had one to 8.4 acres. They were swarming this place. People thought I was nuts, but I high-fenced most of them out of these 3,000 acres because it's impossible to manage that many. Now we have one to 30 acres.”

“There's an art and patience to managing rangeland. You can mess it up very easily, but fixing it is hard.” – Bruce Berg

Berg correlates his healthy wildlife population with the presence of cattle on the ranch. “Cattle improve wildlife habitat,” he states. “There's a misconception about that. A lot of people from big cities buy land for wildlife use and remove the cattle. The truth is, cattle and wildlife work together well. Deer eat forbs, not the grass. Cattle eat the grass and open up the area so forbs can grow.”

On Berg's ranch, whitetails are harvested only by family, friends and deserving youth. “One of the best things I've done is bring in people of all ages who've never hunted and let them take their first deer here,” he says. Each fall, he hosts an annual dove hunt for nearly 70 colleagues from his firm.

He also has hosted field days and rangeland tours at Rocosa Ridge. In April 2010, for instance, 189 FFA and 4-H students from the region participated in a wildlife contest on the ranch, co-sponsored by the Natural Resources Conservation Service.

Back at the verdant green pasture, Berg is still answering questions.

“These 153 acres of old cotton fields used to be overrun with Johnson grass. I knew that even if I disked every year, I'd never get rid of it. I remembered seeing eastern gama in Missouri, so I searched online for some that would be acclimated for Texas.”

What he found was Texas Sue, a variety discovered and named by Charles Lancaster of Lampasas, Texas. In 2007, Berg had a local farmer plant 600 pounds of the seed, using a corn planter. “Eastern gamagrass is slow to emerge, so you have to wait until the second year before it can be grazed,” he says. “It's awfully hard to take land out of production for that long.”

These four years later, Berg prefers eastern gama over Coastal bermuda- grass. “It's very palatable well into the fall,” he says. “I let the cattle graze it down to six inches before October.

“Quail like it, too,” adds Berg, who works closely with state quail specialists. “My Lab has run through this pasture and busted up several coveys of them.”

For his excellence in habitat management and wildlife conservation, Berg received the 2010 Lone Star Land Steward Award from the Texas Parks and Wildlife Department for the Cross Timbers and Prairies eco-region.

While the award was well earned, he acknowledges it with modesty.

“Like I always stress, I had a lot of help along the way,” he says.

Bruce Berg is not just a committed land steward; he also has worked to restore and preserve two cultural remnants of Texas history that survive on Rocosa Ridge Ranch.

In the 1890s, the Cheshire Improvement Company of New York bought more than 18,000 acres in Bosque County that included part of Berg's current ranchland. For several years, the owners grew and sold livestock and produce to East Coast markets. To house animals and hay, workers constructed a three-level, hilltop barn from heavy posts and beams fastened with wooden pegs.

In 2005, Berg saved the New England–style barn, painted rusty red and topped with a cupola, from falling down. “Before we restored the exterior, you could look right through the walls,” he recalls.

Farther south on the ranch stand the remains of the Ferguson Picnic Grounds, part of 400 acres owned in the early 1900s by Texas governors James and Miriam Ferguson, who governed one after the other. In a grassy valley, they built a large barbecue pit and concrete picnic tables, which still stand today. “They also built 11 water fountains for guests, which were gravity-fed water from a nearby cistern,” Berg says.

Recent renovation of that cistern included new interior resurfacing and a solar-powered pump. 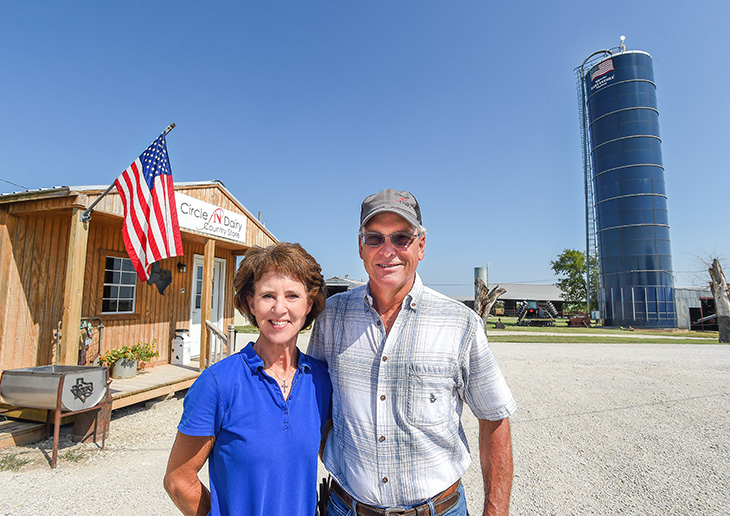 After 160 years, a frontier farmstead gets a second chance.