Agriculture wouldn’t be what it is today without a steady supply of new farmers and ranchers — and lenders willing to take a chance to help them succeed. As part of Farm Credit’s mission to support agriculture and rural communities, our lenders offer special programs and fl xible underwriting to meet the unique needs of young, beginning and small (YBS) farmers and ranchers.

YBS lending remains steady, according to the most recent data available. Last year, nearly half of all new Farm Credit loans were made to small farmers, more than one in five to beginning farmers, and more than one in six to young farmers.

The biggest change from 2015 to 2016 was in the volume of new loans for small farmers, which increased 3.3 percent, compared with a 5.4 percent decrease in total new farm loans overall. Year over year, the percentage of total Farm Credit loan dollars that went to YBS borrowers increased slightly in each category.

Talk to your local loan officer to learn more about Farm Credit financing or young, beginning and small ag producers.

NOTE: Data are reported separately for each of the three YBS borrower categories. For example, the same loan could be counted under both the beginning and small categories.

Rep. Jodey Arrington of Texas, center, talked with constituents from Farm Credit after a meeting in the Longworth House Offi e Building, home of the U.S. House Committee on Agriculture, on July 26 in Washington, D.C.

Arrington and Rep. Mike Conaway, the committee’s chairman, met with more than 40 Farm Credit representatives from associations across Texas that day to talk about the farm bill and other issues that matter to farmers and ranchers.

The meeting was part of Farm Credit Week, a nationwide grassroots effort to help policymakers understand the ways that Farm Credit supports agriculture and rural communities. Altogether, 630 Farm Credit employees, directors and customers made more than 300 visits on Capitol Hill.

Rural land values were relatively stable to slightly higher throughout the United States during the past year, with modest gains in some regions and slight declines in others, according to the Land Values 2017 Summary, published in August by the USDA.

Across the nation, pastureland averaged $1,350 per acre, up by $20 per acre, or 1.5 percent, from the previous year, with the South’s Delta region showing the greatest increase at 2.9 percent from 2016. The largest decrease in pastureland value was 1.7 percent in the Corn Belt region.

Across Alabama, Louisiana, Mississippi, New Mexico and Texas — the five states within the Texas Farm Credit District — Louisiana had the highest pastureland value in 2017 at an average of $2,700 per acre. This was an increase of 3.8 percent, or $100 per acre, from the previous year.

The annual USDA Land Values Summary is generated based on a survey of landowners across the country. To read the full report, go to bit.ly/USDAsummary.

Farm Credit plays a role in the lives and businesses of nearly 500,000 borrowers nationwide. Now you can read about some of these Farm Credit customers on FarmCreditVoices.com, a new website created by the national Farm Credit Council.

The site shares the stories of member-borrowers who work hard to help produce the country’s food and fi er. Featured customers range from a Puerto Rico poultry processor to a Washington state hops grower to an Alabama cotton-growing family that markets its own line of linens. Their stories help illustrate Farm Credit’s mission to support rural communities and agriculture. More borrower profiles ill be added throughout the coming year.

The website also contains links to more than 70 Farm Credit lending institutions across the U.S. and offers a snapshot of Farm Credit’s role in each state. Downloadable fact sheets detail loan volume, number of borrowers and employees, and amount of patronage paid to Farm Credit customers state by state. 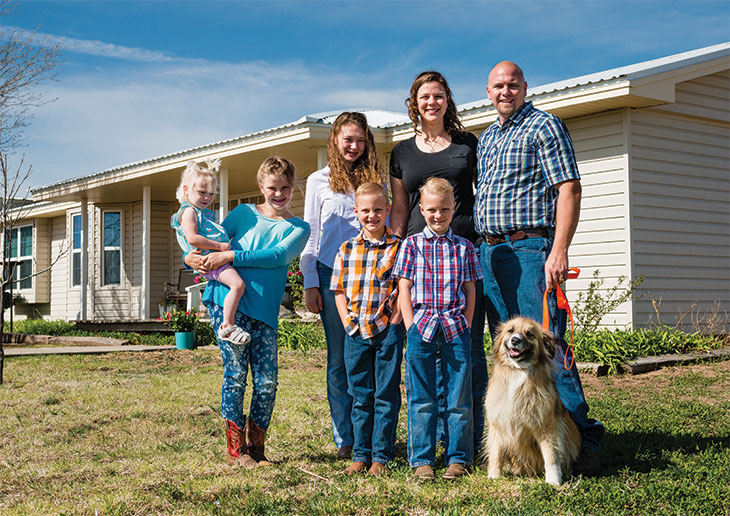 A Texas Panhandle couple learns the benefits of financing their country home ...