For four of the past five years, San Angelo, Texas, farmer John Wilde and his sons, Doug and Matt, have accomplished something that most cotton growers would be thrilled to achieve once in their careers - a yield of 4 bales of irrigated cotton per acre.

Significantly, they achieved this feat while reducing their water usage during a drier than normal period and while helping with research efforts to combat cotton root rot.

Thus, it was no surprise to the local agricultural community when John was named the Southwest Region winner of the 2013 Farm Press-Cotton Foundation High Cotton Award.

That's not all. "Because of the Wildes, we made a break in finding an effective fungicide that controls cotton root rot. We couldn't have done the work without their cooperation," reports Dr. Thomas Isakeit with Texas A&M University's Agriculture and Life Sciences. The Wildes allowed researchers to test fungicides on an irrigated test plot infected with root rot on their farm.

John, who was the 2004 San Angelo Area Conservation Farmer of the Year, has been successful on all counts.

All told, the Wildes produce cotton, milo, wheat and corn on 4,400 acres - both dryland and irrigated - southeast and west of San Angelo, where annual rainfall averages 20 inches. Without enough water, cotton grows poorly. Add an ongoing drought to the mix, and it's tough to make a profitable cotton crop in this West Texas area.

For years, the Wildes have used furrow irrigation. But nine years ago, recognizing its inefficiency and the dropping water table of their irrigation source, the Edwards Aquifer, John investigated the use of Global Positioning Systems (GPS) to install drip irrigation lines.

"I'm not afraid to ask questions. I always talk to everyone," he says. "I like learning from others, not just about their successes but their mistakes, too."

In 2004, he hired brothers Junior and Beto Mandujano - who were using the technology on their farm near Fort Stockton - to install drip tape on 38 acres at Wilde Farms using GPS-directed tractors.

The results were impressive.

"Now we buy our own GPS systems and put it in ourselves," John says. "So far, we've drip-irrigated 850 acres. It's costly, but we did it through cost-sharing with the Natural Resources Conservation Service. Farm Credit has also helped us with operating and equipment costs."

The subsurface lines deliver water directly to plant roots, which decreases evaporation and increases water-use efficiency. "We can also inject fertilizers and insecticides in the lines, and that saves the expense of application," John says. "In the winter, we subsoil-plow between the rows, and that prevents rainfall runoff."

The use of technology is a key reason the family has been able to produce an astounding 4 bales - approximately 2,000 pounds - of ginned cotton per acre in recent years. In Texas, average dryland yields range from 300 to 700 pounds per acre.

Their seed source, FiberMax, also has recognized John's farming success. He is a three-time winner of the prestigious FiberMax One Ton Club award, which recognizes cottonseed growers who produce at least 2,000 pounds of lint cotton per acre.

But for all the accolades, he is modest. "The good Lord helps me out," he says simply.

A Tale of Tough Times and Devotion

Would his loan officers, Brian Meeks and Wade Polk, join him at the National Cotton Council's Beltwide Cotton Conference in San Antonio in early January, where he'd been asked to accept the 2013 Farm Press-Cotton Foundation High Cotton Award?

"We were thrilled and honored to be invited," says Meeks, who is branch president, "thrilled that John was receiving this award, because there's no one more deserving, and honored that he wanted us to be there."

But the pair wasn't surprised by the invitation.

"That was typical John," Brian says. "He sincerely believes that any success he has ever enjoyed is the result of a team effort. He always wants to make sure that everyone on his team is recognized. That's just the kind of person he is."

A few weeks later, asked about the award by a visitor to the family farm, John quickly deflects attention from himself.

"We've all worked together. My family, researchers and Central Texas Farm Credit worked together to help improve our farming community," he says. "It wasn't just me alone."

Inside the Wilde home, plaques and framed awards cover one wall, most of them honoring his leadership in the cotton industry and the community. Although grateful for the recognition, John prefers to talk about how close his ancestors came to losing their land in the 1930s, and how that experience sealed the family's devotion to Central Texas Farm Credit.

"My people came to Texas in 1845 from Germany," says John, who's seated next to his wife, Betty Jo, a registered nurse and high school teacher. "Farming is all we've ever done since then. Being close to the land is part of our German heritage."

"My grandfather, W.H. Wilde, owned more than a section of land and lots of cotton," he continues, "but cotton was worth only a nickel a pound. He owed $50,000 on his land but couldn't make a payment. Only two entities believed in him - the Federal Land Bank of Texas and the P.P. Ewald Cotton Co. First, he refinanced his land with the bank and made his payment. Then Mr. Ewald taught him how to market his cotton with futures and options."

Eventually, the economy strengthened and cotton prices rose. But without the Land Bank and the cotton company, "my grandfather would have lost lots of land," John says. "Some of the land I inherited from my father, Edwin, was among what the Land Bank saved. I've since used land owned by my grandfather as collateral to buy and improve more land with my grandfather's bank, now called Central Texas Farm Credit."

He notes with pride another connection to the lending co-op: His maternal grandfather, A.W. Strube Sr., was a Land Bank director in the 1940s.

Wilde Farms continues to be a family affair. John began farming in 1970 with his father after he earned a degree in ag education from Texas A&M University. Today, sons Doug and Matt partner with him. Betty Jo handles the farm's finances, and John's mother, Cordula, 90, receives daily updates. Although no longer living in the area, daughters Julia Garcia and Joanna maintain an interest in the farm.

"Farm Credit and the Wildes still have the same strong trust between them that started in the 1930s," says Wade Polk, senior credit analyst with Central Texas Farm Credit. "We are proud to be their lending partner." 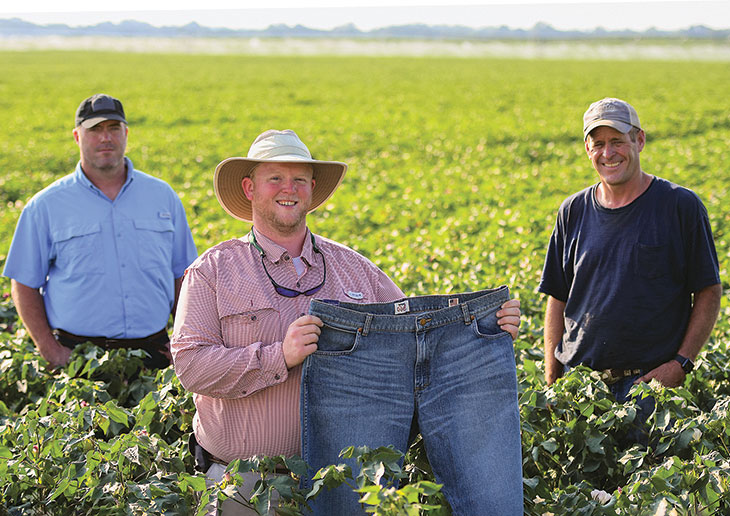 Alabama’s Newby family teams with Wrangler to create jeans from their own cot... 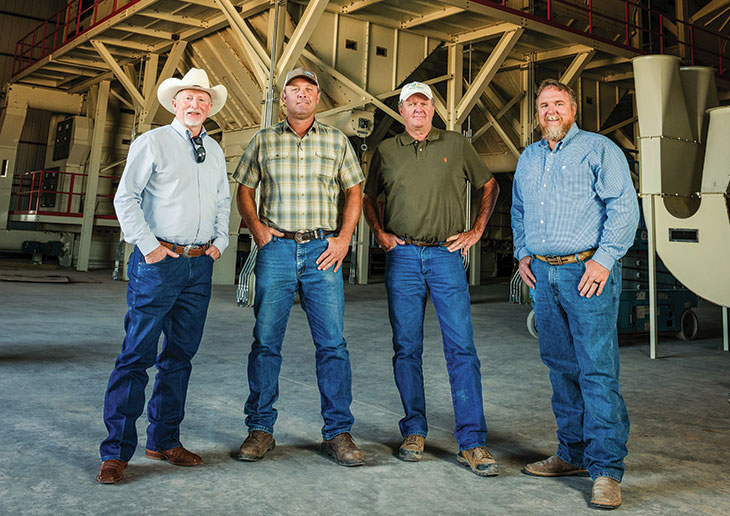