Making a Friend of an Old Foe

For visitors and residents alike, the wind is always a popular topic of discussion in the Texas Panhandle. The strong, blustery currents that sweep across the Great Plains have long been an enemy of the area's farmers and ranchers, but that relationship may be changing.

Over the past few years, wind turbines have been popping up on the landscape, dotting the vast, flat horizon where not much else was seen before. For many local landowners, like Great Plains Ag Credit Chairman Mike McLain, the turbines offer a welcome way to diversify their agricultural operations and finally make good use of their menace, the wind.

But it was totally by accident -- or luck -- that McLain ventured into wind ranching. In November 2002, he came upon a group of men inspecting an abandoned microwave tower on his ranch near Gruver, Texas. They were looking for a potential place to install windresearch equipment. "I told them they didn't need to do any research," McLain says jokingly. "I told them I know the wind will blow."

First Wind Farmer in His Area

McLain agreed to let the group install the equipment under one condition. "I wanted to be the first landowner they talked to if they decided to build wind turbines in the county," he says.

Wind Energy at a Glance 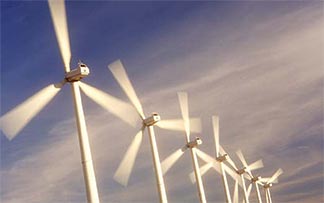 The research proved fruitful, and studies -- including wildlife impact studies, land surveys and Environmental Protection Agency research -- were conducted on McLain's property. In November 2006, construction began on McLain's wind farm. Financed by John Deere Wind Energy, the project entailed erecting 47 Suzlon turbines -- eight that generate 1.2 megawatts each and 39 that produce 2.2 megawatts apiece -- on 2,240 acres that McLain decided to devote to the wind farm, rather than put into full agricultural production. The turbines were built in an east-to-west direction to capture as much as possible of the Panhandle's wind stream, which generally blows from the southwest.

Energy Sent Out of State

The energy generated by McLain's turbines is sent to a collection facility a few miles away. From there, it can be sent to Southwestern Public Service/Xcel Energy customers in Colorado, Minnesota and New Mexico, who specify that they want to purchase wind energy. One megawatt of wind energy can generate electricity for 225 to 300 households.

The only drawback to the turbines, according to McLain, is that they are not a constant source of energy production. They need winds of at least 10 miles per hour to produce energy, and if the winds reach 50 miles per hour, they shut down.

"It's not easy for the power companies," McLain says. "There needs to be another energy supply when the wind is not blowing."

A farmer and rancher foremost, McLain says that the wind turbines complement his family's agricultural operation. He grew up farming and ranching in Gruver, and began his own operation in 1973. Today, alongside his son and son-in-law, he farms corn, wheat and milo in several Texas and Oklahoma Panhandle counties, and is a partner in MC Cattle, his family's stocker and fed-cattle operation.

"The turbines have been very compatible with farming and ranching," he says. "It's been a little difficult with our irrigated land, but we have made it work. As for the cattle, they don't seem to mind the turbines much because they walk right underneath them."

Since 1999, McLain has been one of six investors in USA Feedyard, a 43,000-head-capacity yard located just south of Gruver. The feedyard is also a Great Plains Ag Credit customer.

In addition to business endeavors, McLain has dedicated himself to Great Plains Ag Credit. A stockholder since 1977, he was approached in 1985 to serve on the board and agreed. He has served as the board chairman since 2005.

"I felt like it was the best place for my family to bank and I wanted to make sure that it continued to be the best place to borrow for agriculture," he says. "I'm a believer that it still is."

Eddie York, Great Plains Ag Credit senior vice president of credit, says that McLain's operation is the "ideal family farming business," and that he is glad that the association can benefit from McLain's business savvy.

"Great Plains Ag Credit is fortunate to have someone like Mike, who has such a strong knowledge of the business and who is open-minded," York says.

"Farm Credit has always helped me know what my business is and what it truly needed at the time. They discouraged me at the right times," he says. "Farm Credit will not get a young farmer in trouble."

Just as he is a true advocate for Farm Credit, McLain has become an ally for the state's wind energy industry. Recently, wind turbines in Texas have come under attack by groups and individuals claiming that they are noisy and unattractive neighbors, but McLain says that he has had no complaints.

"I've actually had people tell me that they like looking at them because they're a break in the monotony of the scenery," he says.

Thanks to the wind turbines, most area residents and landowners, including McLain, are changing their opinions on the wind.