An Alabama greenhouse business shows what a first-generation farmer can accomplish with determination, mentors and financing.

Farming got off to a stormy start for Jon Hegeman, who’d just started out on his own when hurricane after hurricane soaked North Carolina.

“In the Carolinas, you like to farm along the river bottoms, and it was 6 feet under water at harvest,” says Jon, who in 2004 had invested what little money he had, plus some of his parents’, in the crop. “I went broke that year.”

The experience changed the 22-year-old’s mind about an offer to manage a 4-acre greenhouse operation in northeastern Alabama. He accepted, negotiating for the option to buy after four years.

Now 36 with a family and a growing greenhouse business near Anniston, Ala., he’s never forgotten the challenges young farmers face.

“You can have mentors who believe in you, but at end of the day, you need capital to make it happen,” the Alabama Farm Credit customer says. “If it wasn’t for the opportunity to get into the business through sweat equity, I wouldn’t have been able to afford it straight out.”

For a beginning farmer with no land and little capital, it took hard work to get established, but it’s paid off.

Today Greenway Plants has 12 acres under glass and 15 acres of outdoor space, putting every square inch to use. Each year the business produces millions of plants — including spring accent plants, hanging plants, groundcovers and 400,000 chrysanthemums — that are sold at Walmart, Home Depot and Lowe’s stores in the eastern U.S.

Greenhouses were a return to Jon’s roots, but he didn’t know it at first.

The child of missionaries, he grew up in the Dominican Republic, Canada and Florida, and came to love agriculture while riding horses with Dominican vaqueros and, later, participating in 4-H. After high school he became a Spanish translator for a custom harvester, working with migrant crews and learning about sales.

Not until he was farming produce himself in North Carolina did he notice a familiar name on some greenhouses and discover a shared connection to his Dutch grandparents. Those newfound relatives saw his potential and offered him a job in 2004.

In 2008, Jon bought his greenhouses and merged with a neighboring operation, doubling in size. Wanting to be better, not just bigger, he also went to college and sought mentors from all walks of life.

It wasn’t long before he and his wife, Amy, were named Alabama’s Young Farm Family of the Year in 2012, then served on the American Farm Bureau Federation’s Young Farmers and Ranchers Committee in 2014-16.

I don’t plant anything until it’s sold. In the independent market, you grow it and hope to sell it. We sell it and hope to grow it — which is tough in its own right.

“I came from a fourth-generation ranching family, and he is first-generation greenhouses,” says Amy, who’s from West Texas. “He’s not grown up thinking, ‘Oh, this is the way we’ve always done it.’ He was willing to learn.

“He hustles, and he doesn’t quit.”

Now a contract grower for Metrolina Greenhouses, Color Point, Rambo Nursery, South Central Growers and Young’s Plant Farm, Greenway doesn’t get its name on the label, but it does have consistency and stable prices.

“I don’t plant anything until it’s sold,” Jon says. “In the independent market, you grow it and hope to sell it. We sell it and hope to grow it — which is tough in its own right.”

Turning a profit hinges on quality and efficiency, so he finds ways to improve his 30-year-old facilities, streamline the workload and automate. This year he added a barcode inventory system, and he’s following the industry’s lead by replacing perlite in his growing medium with sawdust, which is 90 percent cheaper.

“The good thing about being the smallest guy is everybody else goes first,” says Jon, whose greenhouse customers help him improve by sharing the science behind their decisions.

Through his relationships with bigger operations, he’s also bought used transplanting machinery and greenhouses for pennies on the dollar, and is installing salvaged aluminum tables that roll so workers can move plants without handling each one several times.

Another way he boosts efficiency is by monitoring water, energy and chemicals as part of a sustainability certification program from Dutch company MPS. Greenway also recycles plastic containers and manages pests with predatory insects.

“The consumer knows we care, and for us it’s good because we can see how we do from year to year,” Jon says.

Dedicated Employees Are Good for Business

Strong consumer demand is one of the best things about the greenhouse business, Jon says.

To maintain production, he employs 47 people, most of them year-round. He also has a partner, Shawn Keel, who has worked his way up over 14 years and is like a brother to him.

When you see someone who is good at what they do, has good character and is willing to work, you want to be a resource and help them any way you can.

“I love my employees,” Jon says. “They are the key to the success of our business.”

Greenway Plants could grow even more if it weren’t so hard to find labor locally. At one point, it went through 300 people in three months to fill eight positions.

What bridged the gap is the U.S. Labor Department’s H-2A program, which enables farmers to find temporary workers overseas. It’s been so successful that Jon is building more worker housing.

Fluent in Spanish, he has a comfortable rapport with his crews.

“I hear what they’re saying,” he says. “They trust me and I trust them.”

You Have to Tell Your Story

Even with enough labor, a business needs capital to grow.

For the Hegemans, funding limits on USDA loan programs were too low for the commercial operation, and at first it was hard to find lenders who would take a chance on a young farmer or specialty crops.

“It was humbling starting out,” Amy says. “How do you sell your business to someone?”

Jim Tollison, vice president and branch manager at Alabama Farm Credit’s Talladega office, helped them get over the hurdle. Though he wasn’t their lender, he offered valuable tips on financing.

“When you see someone who is good at what they do, has good character and is willing to work, you want to be a resource and help them any way you can,” says Tollison, who’s a big believer in serving young, beginning and small farmers.

Tollison suggested writing a business plan, listing goals and the steps to get there.

“I understand how to grow a plant and sell it, but I didn’t understand banking,” Jon says. “Jim actually came out, looked through things and said what they look for. He helped me so I could present this to any bank. Nobody else had been able to do that.

“I took his advice, and a local bank jumped right on it.”

Jon talked about the experience at a national Farm Credit conference on lending to the next generation in 2015, when he was chairman of the Farm Bureau’s national Young Farmers & Ranchers Committee.

“Educating bankers about what you do goes a long way,” he now tells fellow farmers. “It goes back to why we’re involved in the Farm Bureau — you have to tell your story. The only difference with financing is if you don’t tell your story, your balance sheets tell it for you. You’ve got to be smart.”

In 2016, Jon became an Alabama Farm Credit customer himself, which led to bigger things last year when it was time to upgrade to a sophisticated AgriNomix soil blending system.

Andrew Pinyan, a new loan officer in Tollison’s branch, recommended financing through Farm Credit Leasing, an option that can have tax advantages and preserve working capital.

“I can’t say enough about Farm Credit Leasing,” Tollison says. “Jon was very open to it. He looks at his efficiency and cost.”

Jon was already thinking ahead, and decided to buy a greenhouse operation that he’d been leasing 35 miles away in Centre.

“I love the community bank that I deal with, too, but I price things out,” Jon says. “They said with patronage, it’s no contest. Go with them.”

And with that, last year Jon purchased his third operation in a decade.

Since then, he’s built barns and greenhouses, drilled wells and poured 600 yards of concrete for paths and foundations.

More upgrades are coming, but after such rapid growth, Jon aims for a moderate pace once he’s 40. He’s also started a small cattle operation, and he and Amy manage a family ranch in West Texas.

“We’re finally at a stage where banks compete for our business. That’s a good sign.”

Opportunity Knocks, and Horses Get a New Home

Starting out in agriculture isn’t easy, but youth has its advantages.

In Jon and Amy Hegeman’s valley 80 miles east of Birmingham, Ala., shifting demographics have led to more farms coming on the market.

“Most people in our industry are almost retirement age,” Jon says. “So who’s the next generation?

“Young people in agriculture today, if they have the right capital, are in a very good position in the next 10 years.”

Last year to buy 12 acres, the couple found the capital they needed at Alabama Farm Credit. They’re now adding improvements for Amy’s horse operation, which had been next to Jon’s business before his greenhouses expanded into her riding arena, barns and pasture.

Horses are in Amy’s blood. Her grandmother, Lottie Jo “Sug” Bloxom, rode with Roy Rogers at Madison Square Garden, and in 1948 was a founding member of the Girls Rodeo Association (GRA) — now the Women’s Professional Rodeo Association. Sug’s sister, Margaret Owens, was the first GRA president and first world champion barrel racer, and is in the Texas Rodeo Hall of Fame and the National Cowgirl Hall of Fame.

“When rodeo started, the men competed and the women were called sponsor girls. They were advertisements, basically,” says Amy, vice chairman of the Alabama Farmers Federation Equine Committee. “The group that started the GRA pushed for women to have an event in the rodeo, to actually be a part of it.”

Rodeo is still a big part of her family’s life, so when she goes home to Andrews, Texas, the horses go, too. Over the Fourth of July, she and her mother barrel raced in Grants, N.M., and the Hegemans’ 6-year-old daughter, Ella, entered the junior rodeo.

There was a learning curve moving from West Texas, where the climate and terrain are very different, but she sees similarities, too.

“People here are very friend-ly and family-oriented,” she says. 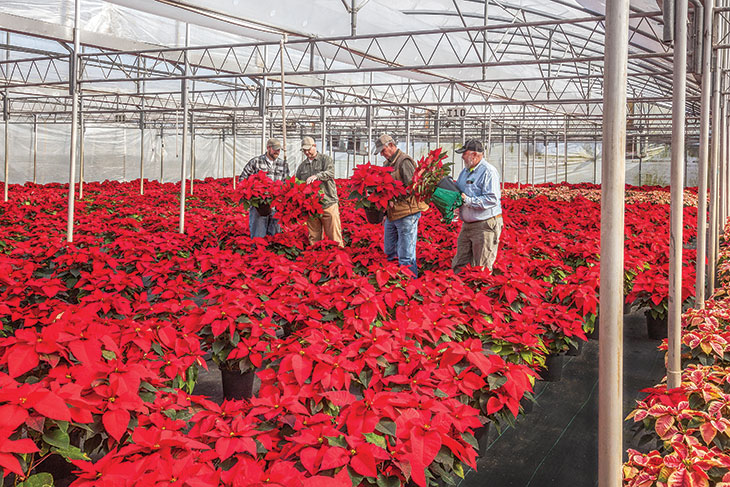 Growing the Colors of Christmas

After a humble start in the greenhouse business, an Alabama farm family has b... 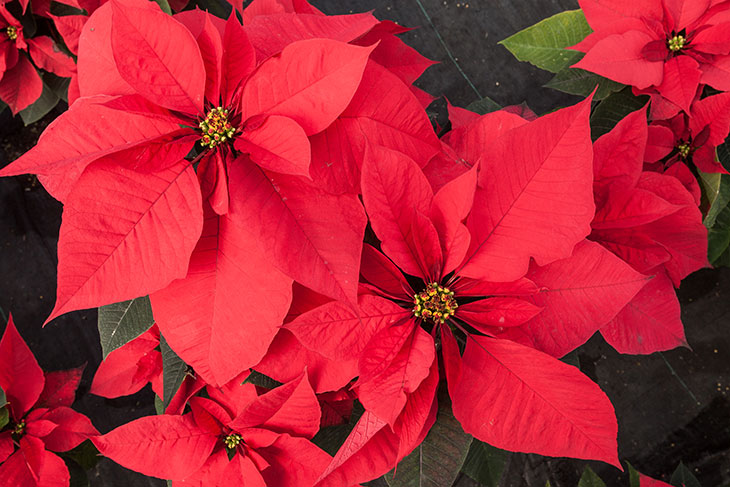 Although it is a holiday mainstay, the poinsettia plant is a mystery for many...