Sometimes it takes a little setback early on in a career to propel one forward in the future.

Such was the case with fifth-generation West Texas farmer Guy Carthel, who readily admits that he nearly lost his shirt growing cotton in his early years of farming.

Without that experience, however, Carthel might not have discovered the rewards of growing alfalfa hay, the crop that pays the bills today.

Guy Carthel has practically perfected his technique for producing high-quality alfalfa hay — hay that is soft, sweet-smelling and leafy green. Here are the steps he follows:

In the late 1980s, Carthel had recently finished school and wanted to get started in farming. His father, John Lee Carthel, let him plant some cotton and corn on part of the family farm near Lockney in Floyd County, east of Plainview. Being short on cash, he did not buy crop insurance that first year, however. As luck would have it, rough weather claimed his crops.

"I dug myself a pretty deep hole," Carthel says.

With much help from his dad, he continued to farm and also did some custom baling and grew grass hay in an effort to pay off his bills. One summer, while delivering hay to Ranchers & Farmers Supply in Amarillo, he noticed alfalfa trucks coming and going, and decided to try his hand at growing alfalfa.

Carthel soon discovered that producing and marketing alfalfa is different than handling grass hay. Small square alfalfa bales earn a premium and are much easier for the customer to handle than large bales. On the downside, producing small bales is much more labor-intensive.

"Forty, fifty years ago, you could put a hay crew together," he says. "Today you might get a crew for a few days, but after their first paycheck, they're not coming back."

Carthel realized that the only way he could increase production, and thus his income stream, was to change his haying practices.

"I just couldn't see how we could bale more hay if we didn't have more efficient handling equipment," he says.

Carthel approached his local Great Plains Ag Credit branch in Plainview, where he had done business previously, for a loan to purchase some modern haying equipment.

With financing from Great Plains, he invested in a mobile stacking unit that binds 21 bales together with steel bands. The large stacks are loaded onto a semi-truck with a grapple and skid steer. The first year after buying the stacker, he baled over 35,000 bales, which was a significant increase over the previous year. Since then, he has switched to a different model, a Bale Baron, which wraps the stacks with string.

This year, Carthel took the operation to a whole new level, adding a DewPoint 6110 steamer, along with a double-baler hitch, which allows him to raise the moisture level of the hay.

Moisture content is critical to the palatability and shelf life of alfalfa. At 18 to 20 percent moisture, the hay may sweat and become moldy if the bales remain stacked. At 9 or 10 percent, it's "fall-apart hay," says Carthel.

"Everybody hates to buy alfalfa that is so dry it falls apart," he explains. "We have a short window, one-and-a-half to two hours a day, to bale in this climate. Now, with the steamer, we can bale 10 to 12 hours a day and make nice hay that's all the same quality."

At Carthel Farms, baling usually occurs long after their neighbors are asleep and the humidity level of the air has risen.

"It's a team effort to get it all in the barn each day," Carthel says.

Despite the unusual work schedule, Carthel appreciates that the steamer allows him to plan his work.

"I have a little more of a normal life again," he says.

For Carthel, the haying season normally begins in late April and continues through September, allowing five cuttings spaced about 30 to 32 days apart. Last year, he produced 75,000 bales of alfalfa on 650 irrigated acres. This year, due to the late spring, he lost out on the first regular cutting, but still ended up harvesting more than 55,000 bales.

Instead of finding large customers on his own, Carthel markets his hay through Ranchers Supply, whose customers are primarily horse and pet owners buying hay by the bale. Year-round, he supplies the business with two semi loads of alfalfa each week.

"Guy fills up his barns and warehouses with hay for us," notes John Harshbarger, co-owner of the feed store. "We couldn't do it without him — we wouldn't want to."

Harshbarger is quick to praise Carthel's management practices and his focus on quality.

"Alfalfa takes a lot of work," Harshbarger says. "To produce a really good alfalfa, you have to be willing to get out there in the middle of the night. If the humidity is right, it will make a nice flake and the leaves won't fall off."

Carthel also makes 900-pound large round bales on request, and this year, for the first time, he planted a field of Teff, a drought-tolerant forage grass that is attracting some interest among horse owners.

"Teff can set there and be burning up, and then you put water on it, and it just jumps out of the ground," he says.
For now, though, small square bales of alfalfa retail for approximately $350 a ton versus $275 a ton for large round bales, providing Carthel and his sons with a regular, more guaranteed income than the crops he first grew.

"Selling through the feed store, I don't get quite as much money as some guys do," he observes, "but in years when there's hay stacked up all over the country, I still have a market."

And after getting off to a slow start in farming nearly 25 years ago, Carthel is happy to have found his niche as a hay producer in one of the largest cotton-growing counties in the state.

"Most of this is only possible because of help from family and a good relationship with a great lender," he says. 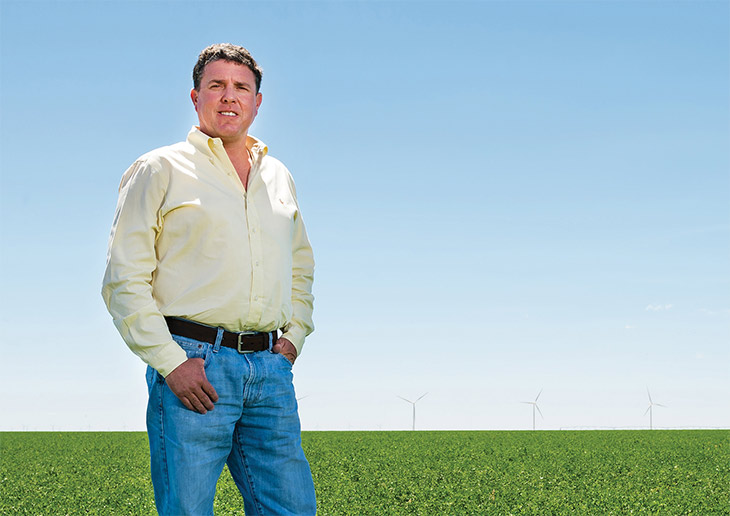 A couple finds their niche growing alfalfa hay in the Texas Panhandle.