Going With the Grain

A family that grows and mills rice finds new markets for one of world’s staple foods.

On a clear spring morning, a steady breeze blows across the coastal prairie west of Beaumont, Texas, lifting the state flag at the farm of Debbie and Kevin Robbins.

Just down the lane, they start their morning watching the sunrise over a small lake, surrounded by their rice fields and cattle pastures.

A few years ago, the reservoir seemed like the perfect spot for a fishing cabin for Kevin and his buddies. But with such scenic vistas, the place really needed picture windows, a second story and more amenities, Debbie thought. Before they knew it, they didn’t have a man cave, they had a new home.

“You have no idea how you messed me up,” jokes Kevin, always ready with a good-natured remark.

Now settled in, the couple loves watching waterbirds from their upstairs landing, stargazing on the dock and listening to airplanes flying in rice during planting. They are also surrounded by family. Their son, daughter-in-law and grandson have a new house next door, and Debbie’s brother and their niece live just across the pasture.

And when your family is steeped in the rice business, there’s no better place to live.

“Our other house was pretty, but I don’t know what it is about this place,” says Debbie, president of Doguet's Rice Milling Co. in Beaumont. “It’s just so calm. We’re right in the middle of the rice fields.”

Rice Is a Family Legacy

Descendants of Louisiana rice farmers, Debbie and her five siblings learned about the industry from their father, Darby Doguet, who bought a rice dryer in 1979 in Beaumont, in the heart of Texas rice country. Two years later, he expanded, founding Doguet’s Rice Milling Co. The legacy continues, and Debbie, her brother Mike, husband and two sons now work at the family business, which has about 45 employees.

“My father knows the rice business inside and out,” Debbie says. “He is very business savvy.”

During the July-October harvest season, trucks of rough rice line up continuously at both the mill and a larger rice dryer and storage facility about five miles to the south. Together, the facilities can store 620,000 hundredweight of rice.

“We’re at capacity every year,” says Debbie, who has worked at the business from the beginning, including 13 years in partnership with Mike after their father retired, and four years as owner and president. “The farmers in this area really need rice facilities.”

The business works with about 50 rice farmers from the west side of Houston into Louisiana.

“My dad a long time ago was a commissioned rice buyer, and we still put on a sale to market the farmers’ rice every two or three weeks,” she says. “We try to buy all the rice that comes in, but if we can’t use it at the mill, we sell it to mills here and in Louisiana and Houston. We take care of the payoffs and paperwork for them.”

The Doguet name is well-known in the area. In addition to drying, storing, marketing and packaging rice, the mill also operates a store that sells rice, rice by-products and family products such as turf and jars of roux for making gumbo. Nothing is wasted at the mill, where rice bran is sold as a cattle feed supplement, and rice hulls are sold as horse bedding and a drying agent, or composted and offered for free to local gardeners.

What assured the company’s growth was the decision about 25 years ago to mill certified organic rice, the product that is now experiencing the greatest demand.

“There are fads that disappear, but organics have just grown year after year,” says Debbie’s son Greg Devillier, who joined the family business in 2006 after earning a marketing degree at Texas State University. In training to become general manager when his uncle Mike retires this year, he also serves on the board of the USA Rice Millers Association.

Organic rice now makes up about 75 percent of the mill’s business, Greg says. The product sells at a premium, so to get a predictable price, the mill contracts with farmers and buyers. When a farmer considers trying organic rice, the family recommends talking to one of their growers who has hands-on experience with the cultivation and paperwork.

“The interest is there, and there are more and more people growing it,” Debbie says. “It’s a win for the mill and a win for the farmer.

“Organic is the way of the future. It’s what consumers want, it has no pesticides, and it’s good for the environment. I think it’s the way to go.”

If you’ve ever bought organic rice, chances are that some has come from the mill. Customers have spotted the Doguet’s label across the U.S. and overseas, but the majority of the mill’s brown and white rice is sold in 2,000-pound totes to mills, grocery stores and manufacturers that private-label it, use it in foods or mill it into flour.

The business is also experiencing a lift from another consumer trend. Because Doguet’s doesn’t mill any other grains, its rice is suitable for people on a gluten-free diet by choice or necessity.

“There are so many rice products out there,” Debbie says. “There are rice crackers, breads, pasta, seasoned rice flour, rice milk. You can buy anything you need made with rice.”

At a recent natural products expo in California, strong interest in the mill’s organic, gluten-free rice reinforced the family’s determination to expand.

Already, they have installed a pest-control system that uses carbon dioxide instead of chemical fumigants, upgraded their dust controls and been certified by the Safe Quality Food Institute.

Next they plan to build a climate-controlled warehouse and packaging facility with more storage tanks, enabling them to package up to six products simultaneously. They’re also considering a robotic packaging system and a flour mill to keep up with demand.

The Robbinses say it’s easy to believe in their product when it’s so good for you. They also recognize its value to their registered Brangus and commercial cattle.

Rice and cattle are strongly linked in this part of the state, where many farmers rotate rice fields with pasture. The bran that is removed from white rice during milling also makes a palatable and nutritious feed supplement for the cattle that share the land.

Kevin, who joined the company in 2013, says that when he wanted some of the mill’s rice bran as a high-protein feed supplement recently, he had to wait his turn.

“I tried to get on the list and was told, ‘Well, it may be a while,’” he says. “There were at least three screens of people waiting to get rice bran. We can’t make enough of that.”

Preheat oven to 350 degrees. Brown ground meat, then combine meat with remaining ingredients in a medium baking dish. Bake for one hour, turning every 15 minutes.

“I make this recipe all the time because it’s so good,” says Debbie, who often adds a tube of pan sausage to the ground meat. “It’s easy, it feeds a lot of people, and it’s great for family functions.”

The Robbinses have been expanding their cattle operation at their farm, and also have cattle at their deer camp 400 miles to the west in Carrizo Springs, in a region celebrated for trophy white-tailed deer.

When they bought the family getaway in 2012, they went to Capital Farm Credit , which has provided financing for the Doguets since Darby became a member years ago. Debbie’s brothers Mike, who has cattle and turf operations, and David, president of the south Texas turf company Bladerunner Farms , are also customers of Farm Credit associations.

“Debbie is a very intelligent, hard-working individual, and Kevin is hands-on and very involved in their commercial rice operation,” she says. “I just think a lot of them.”

“I’ve worked with a lot of different loan officers over the years, and Teresa really gives you ideas to help you get what you need,” Debbie says. “We have always had a farm loan from Capital Farm Credit. When we need financing, we consider them every time because of the patronage dividends.”

Back at the mill, framed photos of local youth livestock show winners line the hall to Debbie’s office. As she walks by, she reminisces about how she and her siblings grew up raising lambs, steers and hogs, and says the mill buys winning livestock from youth at the South Texas State Fair. They also donate to food banks, help feed disaster relief workers, support Catholic charities, sponsor a day at the annual Texas Rice Festival, and sometimes give meat to their employees, whom they consider an extension of their family.

“The community is giving to you and buying your product, and I just love giving back,” she says.

Serving the community is also part of their motivation to expand.

In Beaumont, Texas, where the average rainfall is as heavy as the soil, rice not only tolerates the conditions, it thrives. Farmers have grown rice in the area since the late 1800s, typically in a rotation with cattle or crawfish.

Together, the top rice states — Arkansas, California, Louisiana, Mississippi, Missouri and Texas — produce 20 billion pounds of rice a year, generating $34 billion in economic activity and supporting 128,000 jobs, according to a 2010 study.

Fundamental to the crop’s success are yields that average about 8,000 pounds per acre, more than five times what they were in our grandparents’ generation, says Dr. Lloyd T. “Ted” Wilson, professor and director of the Texas A&M AgriLife Research Center at Beaumont. University and USDA scientists at the 105-year-old center work closely with growers to develop improved cultivars and production and management methods.

Although yields for organic rice are about half that of conventional rice, organic rice fetches about twice the price for growers, says Greg Devillier, vice president at Doguet’s Rice Milling Co.

Scientists who work with organic and conventional rice at the center have collaborated on projects with the mill and with Mike Doguet, mill general manager and past president of the Texas Rice Improvement Association. And Capital Farm Credit, which has served generations of Doguets, sponsors the research center’s annual educational field days for producers, industry representatives and international visitors.

“They want to know what farmers in the area need, and do a lot to help them,” Debbie Doguet Robbins, mill president, says of the center. “We’re fortunate to have them out here.” 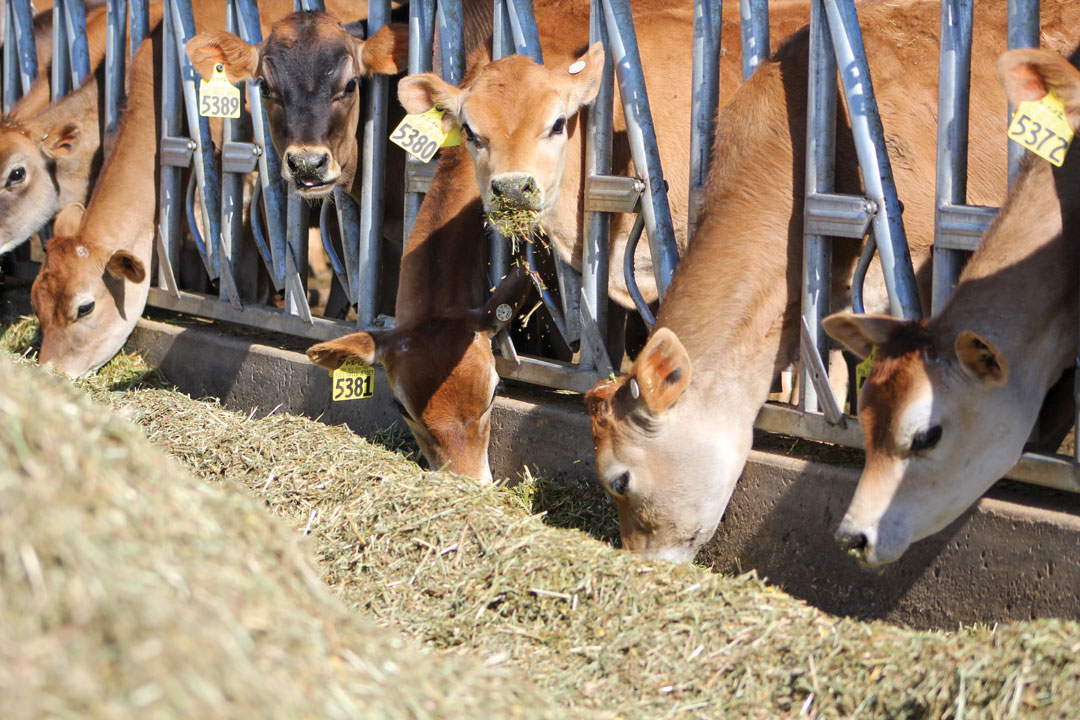