Drip Irrigation Helps Put the Water Where It’s Needed Most

Backed by their Farm Credit lender, South Plains cotton farmers Russ Stanley and Jeffrey Kitten believe that spending money to save water will pay off in the long run — in more ways than one.

On the southern High Plains of Texas, at the heart of the largest contiguous cotton patch in the world, miserly use of water is essential. With only 18 to 20 inches of rainfall in the average year, more than half of all cotton farmers have turned to irrigation to help assure a crop.

However, the Ogallala Aquifer, the life-giving pool, whose southern tip quenches the thirst of area crops, is declining, and farmers are responding, by stretching irrigation water every way they can.

A growing number of farmers, including numerous Farm Credit customers, have turned to subsurface drip irrigation — called SDI, or simply “drip” — to get the job done. They report that they have achieved higher, more consistent yields by their actions, while making better use of their water resources.

“Our water table is dropping off a lot,” says Levelland, Texas, cotton grower Russ Stanley. “With drip, we still use all the water that we can pump, but we’re using it more efficiently to make better yields.”

Modern irrigation has teamed up with the eradication of boll weevils, superior new cotton varieties and improved management practices to change the ball game for cotton farmers in the area.

Stanley first installed SDI on 45 acres in 2001. He has steadily added more underground pipe, and now 1,300 of his 2,400 acres of cotton are watered this way.

While Stanley’s individual yields have gone up, the entire area has seen increased yields and a more dependable supply of cotton — results that are good for business in general.

“The drip acreage is consistent and stable. Drip helps take the peaks and valleys out of our production, and it has increased the total amount of cotton we produce,” Wilson says.

“AgTexas is really supportive of technology such as irrigation and GPS systems for better production and management.”

Behind Every Good Drip Irrigator Is a Good Lender

Both Stanley and Wilson credit the forward-thinking attitude of their financial partner, AgTexas Farm Credit Services, for analyzing and recognizing the value of this relatively high-cost new technology, and thereby helping to improve and stabilize yields in this area.

“AgTexas is really supportive of technology such as irrigation and GPS systems for better production and management,” says Wilson, who points out that the same philosophy holds true in his ginning business, which AgTexas also finances. “They support you, as long as you have a good plan for growth and profitability.”

“Russ [Stanley] is a big reason we have all the drip in this area,” Doug Hoelscher, AgTexas vice president of lending services in Levelland, comments. “When he put in that first system, one farmer here asked how farmers could afford to do that. After the first year, he saw the yields Russ was getting and asked how farmers could afford not to do that.”

“We have a lot of progressive farmers here,” Hoelscher continues. “They’re on the leading edge of new technology. They take care of business, and we’re proud to serve them.”

Stanley grew up farming with his dad, who still independently operates his own farm and has installed drip irrigation of his own. Now, as the generations roll on, he often takes his two-year-old son, Kegan, along, when he makes the rounds — a side benefit to farming that most other professions can’t offer.

The southernmost end of the vast Ogallala Aquifer, the lifeblood of this region’s agriculture, is declining, and area farmers are concerned about their future ability to water their crops. Wells monitored in a large region served by the High Plains Underground Water Conservation District No. 1 do little to dispel the concern, and the district has recently discussed the possibility of limiting the amount of water that can be pumped onto local crops.

Annual depth-to-water measurements showed the aquifer declined an average of 1.5 feet over the district’s 6.8-million-acre service area during 2009. The aquifer lost an average of more than 9 inches of its water annually over 10 years, ending in early 2010. The Texas Water Development Board estimates that in Texas, the Ogallala is getting 1.1 million acre-feet of recharge annually, while 6 million acre-feet are being pumped out of it, with the lion’s share going to irrigation. So, the vast Ogallala is hardly limitless, as once thought.

Jeffrey Kitten and his three brothers, all of Lubbock, install drip systems for themselves and other farmers on the South Plains, as well as using LEPA (Low Energy Precision Application) center-pivot sprinkler systems. LEPA is also very efficient, although Kitten admits nothing approaches drip for placing water where more of it reaches the plant roots and less evaporates.

“Our general farming partnership is Kitten Land Company, which my dad, my brother Craig and I started in 1993,” Kitten says. “Since then, my dad retired, and my brothers Timothy and Nicholas joined us.” The brothers also operate Kitten Pump and Supply, LLC, which installs drip systems for others.

The family has been farming in this area since Kitten’s great-great grandfather started in the late 1800s. His dad, Roger Kitten, became a customer of AgTexas Farm Credit Services in 1964, and Kitten Land Company has been doing business with AgTexas since 1993.

“People are learning to do more with their water,” Kitten says, and this is certainly true of his family. “We bought our first center pivot in 1993, and that’s also about the time we started with our first two drip systems.”

The Kittens have installed drip systems on 25 percent of their irrigated land and center-pivot sprinklers on the remainder. The brothers have eliminated furrow irrigation entirely, and are switching some of their older center-pivot systems over to drip irrigation.

“If we are renting land, and the landowner doesn’t want to invest in drip, we may install a pivot,” Kitten says. “Then if something happens and we no longer rent the land, we can take a pivot with us. The drip is permanent.” He says the cost of installing a drip system with tapes buried every 80 inches ranges from $850 to $900 per acre, whereas a center-pivot system can be installed for approximately $60,000 for a quarter-mile system, which waters 125 to 130 acres.

The Kittens finance a new drip system one of two ways through AgTexas — either outright or by wrapping the cost into the note for purchasing new land.

“AgTexas has seen the results of drip, and they’re very willing to lend money for it,” Kitten says.

Which system achieves better yields — drip or high-efficiency sprinklers? For the Kittens, they are both excellent, with the topmost yields and a 200- to 300-pound average yield advantage going to drip.

“Pivots with LEPA are 85 to 90 percent efficient, and drip is close to 100 percent, so nearly every drop of water you pump is getting to your crop,” Kitten says.

“The Kittens are very good managers,” says Mike Metzig, vice president of AgTexas in Lubbock. “They embrace technology and are not afraid to explore new farming methods that make them very efficient. I have learned from them and appreciate the opportunity they give me to be part of their operation.” 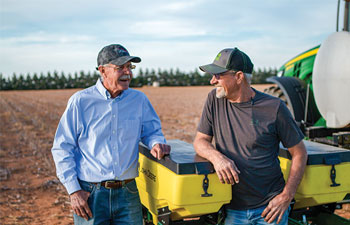 Technology and careful management are the keys to success for two Texas cotto...

New Ideas for an Old Business

With the help of new technology and a new lender, John Evans is continuing hi...