Come Hail or No Water

Near the start of the 20th century, a young man from Czechoslovakia came to Texas. He married a farmer’s daughter and worked hard, eventually moving from “farmhand” to “farmer,” and unknowingly laying the foundation for a family legacy of farming that continues today.

Two generations later, Ruben Holik and his family are upholding the family tradition. He and his sons, Jason and Josh, farm dryland cotton and milo on their farms in Wall, Texas. And even in times like today, when the severe drought that has plagued Texas for most of the year is keeping the Holiks out of the fields, the family can’t imagine doing anything else.

The youngest of four brothers, Ruben got his start in farming by going into business with two of his older brothers, with help from their father. His parents began giving land to the boys, and when Ruben returned from a stint in the Marine Corps, he joined them on the farm.

“If you wanted to be a farmer, this was the way to get established,” Ruben said of the gift.

Both Jason and Josh expressed interests in farming early, and Ruben and his wife, Rhonda, wanted to help their sons get started in the business in the same way.

“We wanted to give them the same opportunity if they wanted it,” Ruben says. “If you don’t have the land, it’s a little tougher of a road.”

Despite getting off on the right foot, Jason and Josh haven’t had a successful farming operation just handed to them. They worked side by side daily with their father before going it on their own after high school.

The brothers say that while they value Ruben’s advice and always ask for it, they may not always follow it. However, Rhonda says that sits just fine with Ruben. “He gets a lot of enjoyment watching them make their own decisions and do well,” she says.

Knowing what worked for the generations before them, the Holiks use tried-and-true conventional farming practices, combined with strong work ethics, frugality and family support, to make their operations profitable.
But rather than relying heavily on pesticides and herbicides, the Holiks mainly use mechanical farming methods to work their land.

Keeping their fields clean is a high priority for the family, and Josh says that although many farmers are going toward no-till or minimum tillage, the Holik family is a little more traditional.

“Maybe we are stuck in our ways, but we go through the field a lot,” Josh says. “We can gain a few dollars on the acre here or there by doing it ourselves. Rather than spending $7 an acre to spray, you can spend what a half a gallon of diesel costs.”

Paying close attention to the bottom line is another lesson that Ruben has passed on to his children. He preaches “if you can build it, build it” and “if you can fix it, fix it” and don’t be afraid of putting in the extra work if it means input costs can be kept low. Ruben says that neither his father nor grandfather ever hired any outside help, and it’s a practice he’s continued.

As is the case in most families that work together, especially farming families, the Holiks are close-knit. Jason and his family — wife, Shyanne, and children, Jaxon and Kylee — live just down the road, and Josh also lives nearby. Ruben and Rhonda’s daughter, Haley, is a student at Moody Bible Institute in Chicago. Not wanting to be left out of the family business, and understanding the value of land as an investment, Haley partnered with her brothers to purchase some acreage that Jason and Josh actively farm.

Ruben and his sons also work closely with Ruben’s brother David and his three sons, who farm nearby too. Each generation agrees that there are definite benefits to having your own built-in peer group of farmers in the family.

“Having Josh and my cousins farming along with me makes it more enjoyable,” Jason admits.

The brothers’ latest joint purchase was 500 acres of pastureland. Again, no strangers to hard work, Jason and Josh are working to remove the abundance of mesquite trees on the property and convert the acreage to virgin farmland.

Although Jason and Josh became borrowers at the referral of several family members, the brothers firmly attest that the association has earned every bit of their business.

“There are other banks, but we’ve never found one that we thought could do any better than the Land Bank,” Josh says about their partnership with Central Texas Farm Credit. “We know that being a part of a cooperative-owned system is the way to go, and they are good people who’ve treated us right.”

Ruben agrees that the Farm Credit association has always had good, knowledgeable people in the office, and the family has a lot of faith in their lender’s opinion.

“One of the privileges of my job is establishing and maintaining good relationships with customers such as the Holik family,” says Meeks. “When your borrowers send their kids to do business with you, you realize the importance of providing the best loan programs and service to each family member. We are fortunate to have many examples like the Holik family in our association branch office. To me, this is the difference in Farm Credit versus other lenders. We encourage ongoing relationships with customers and their families, from generation to generation.”

And if the past is any indication, there will be generations of Holiks farming for years to come. 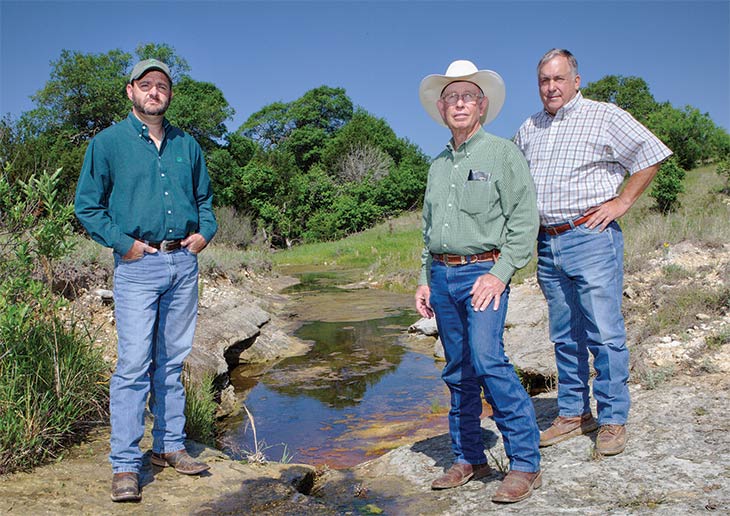