The 2009 Alabama Outstanding Tree Farmers share their farm with others in the name of education.

When Alabama tree farmers Salem and Dianne Saloom pose this question to the 150 fifth-graders visiting their farm, they are quickly met with a resounding “BAD!!” With their answer, the Salooms know they have a long day ahead, explaining how harvesting trees for timber can be a good thing, and why conservation and stewardship are the keys to keeping the industry strong.

Since 2005, Salem and his wife, Dianne, have participated in the “Forest in the Classroom, Classroom in the Forest” program, educating fifth-grade students about forestry, stewardship, clean air and water quality. After their classroom instruction, the students then visit the Salooms’ farm near Evergreen, Ala.

As the 2009 Alabama Outstanding Tree Farmers of the Year, and one of four finalists for the 2010 national title to be announced in July, the Salooms are the ideal teachers for this outdoor classroom. They developed Saloom Properties into a model of sustainability by incorporating best management practices and keeping true to their purpose — to be stewards of God’s creation.

“We talk to the students about timber, timber-related products and sustainability; that is the most important,” Salem says.

According to the Alabama Forestry Commission, there are nearly 23 million acres of timberland in Alabama — approximately 70 percent of the state’s total land area. Private landowners like the Salooms own 80 percent of it.

Dianne and Salem purchased their first piece of property in 1983. Growing up, Salem had always envisioned that he would one day be a landowner, and as an adult with a thriving medical practice in Brewton, Ala., he wanted a place to escape from the city life. The couple purchased 160 acres of land that had been in row crop production and, with deep gullies and erosion prevalent, showed signs of mismanagement and abuse. The Salooms quickly began making improvements.

They cleared an area to build a pond, stocking it with bream and bass, and planted stands of loblolly pines. They also mapped out game plots and constructed a barn to house a newly purchased tractor and implements.

“I wanted to own a piece of property and do something with it,” Salem said. “For us, it’s a way of fulfilling a vision and giving back.”

Just two years after buying the farm, the Salooms began reaping the reward of their hard work. In 1985, the farm received a TREASURE Forest Award — an acronym for Timber, Recreations, Environment, Aesthetics, Sustained, Usable, Resource. The award recognizes private landowners who display their commitment to the TREASURE Forest ethic through hands-on management of their land. The following year, after adopting prescribed burning and planting several additional stands of loblollies, the farm became a certified tree farm through the American Tree Farm System.

The Salooms now have more than 1,700 contiguous acres and 21 different–aged stands of longleaf and loblolly pines under their ownership, and are devoted to continuing good stewardship practices. A certified burn manager, Salem burns approximately 600 to 800 acres each year by prescribed burning, and he sprays annually to control invasive species. The farm’s timber stands are also regularly thinned and treated to prevent the spread of annosus root rot. Herbicides are routinely used on the stands.

“Managed property has cleaner air and cleaner water than unmanaged property, and has been shown to help increase reduction of our atmospheric carbon dioxide emissions by carbon sequestration,” says Salem. “It also increases your wildlife habitat. The two go hand in hand.” Carbon sequestration is the process through which carbon dioxide from the atmosphere is absorbed by trees, plants and crops through photosynthesis, and stored as carbon in tree trunks, branches, foliage, roots and soils.

To provide for the wildlife, Salem created large food plots and planted numerous fruit-bearing trees, including crabapples, chestnuts, Chickasaw plums and several varieties of oaks. The farm’s deer population is closely monitored with the help of a wildlife biologist, and only a limited number of hunters are granted on the property each year. Salem himself is an avid turkey hunter.

Fulfilling the Vision and Giving Back

With no forestry experience in his background, Salem has had to rely on other resources and research to help him fulfill his vision. “Once you are interested in something, no matter what it is, you’ll learn about it,” he says.

He has worked closely with the Alabama Forestry Commission, the Alabama TREASURE Forest Association, the USDA Forest Service, the Alabama Wildlife Federation, the Longleaf Alliance and many others. Dianne gives her husband much credit for not hesitating to ask for help.

“Salem is very proactive as far as finding out what resources are available,” she says.

Another partner important to the success of Saloom Properties is Alabama Ag Credit. The Salooms became customers in 2000, and both Dianne and Salem praise their loan officer, Ed Boyd, for helping them to establish other relationships in the timber industry.

“Ed knows a lot of people,” Salem says. “He creates relationships with people in the industry and passes on an opportunity to his customers. Ed’s job is more than a career, it’s a vocation, and out of that passion he has been an integral resource for many landowners.”

The Salooms also capitalize on every opportunity possible to share the farm with others. In addition to the “Forest in the Classroom, Classroom in the Forest” program, Saloom Properties is a stop on numerous field trips each year. The couple has hosted the National Wild Turkey Federation, the National Tree Farmers Convention and many others.

Salem serves on a program committee that reaches out to small farmers and landowners, educating them about good management practices and ways to maximize the property’s efficiency.

“We want to educate them to take pride in their property. A lot can be done with a smaller piece of property,” Salem explains. “People can do many things to improve their own property year after year that will afford sustainability for future generations.”

The Salooms’ strong commitment to give back extends to their life off the farm as well. For several weeks a year, the family travels abroad, volunteering their time to villages that lack modern medical and surgical care. In past years, they have served in Haiti, Egypt and Togo, West Africa.

Because they are so busy, the Salooms especially cherish the little downtime they do have on the farm. It’s a short drive to Evergreen from their permanent home in Brewton, and they love the change of pace that a visit to the farm provides.

“I may have something that seems like a big problem at home and once I get out here, things are put into perspective,” Dianne says. “It helps me to see creation and realize that the world has been going for centuries and will for many more.”

Although he retired from his surgery practice in Brewton in 2005, Salem works every third week in Monroeville and is able to commute from the farm during those weeks because of its closer proximity. The couple’s son, Patrick, works for a television station in Pensacola, Fla., but visits the farm regularly and recognizes his part in its future.

“My dad has put so much work into this place that it really has become something more than just land,” he says. “It’s his legacy, and it’s something that will never leave our family.”

Are You Smarter Than a Fifth Grader?

Below are some timber industry facts that the Salooms share with students during the “Forest in the Classroom, Classroom in the Forest” program: 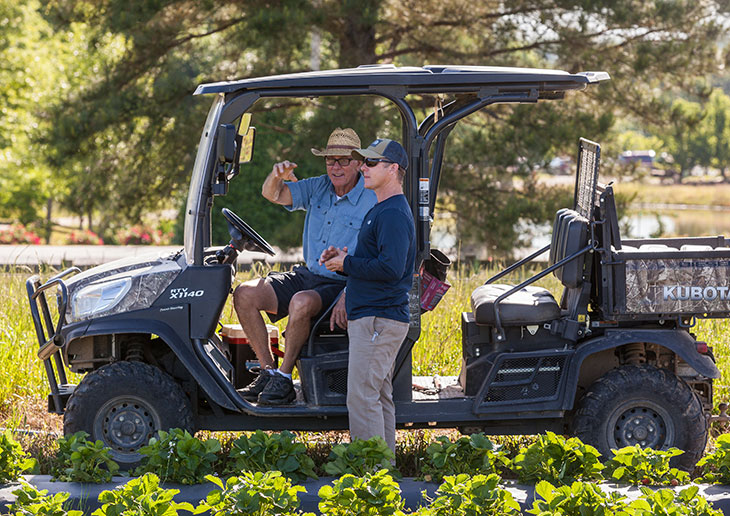